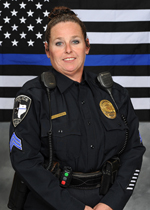 Sergeant Guarnero holds a Master Peace Officer License. She graduated from the Cedar Valley College Police Academy in 1995 and began her career that year with Red Oak Police Department and the Red Oak ISD as a SRO. She became the evening shift Patrol Sergeant for Red Oak PD after serving for two years. In 2001, the Red Oak ISD Police Department became an agency where she became the full time Sergeant. She is a TCOLE Certified Instructor and serves as the Administrative Sergeant. In the 2015/2016 school year she served as Interim Chief of Police. Sergeant Guarnero was awarded District Auxiliary Employee of the Year in 2004.