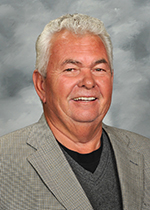 Michael has been employed with Red Oak ISD since 2011. He started as an HVAC technician and later became an electrician technician. He was then promoted to Grounds Supervisor in 2015. In 2017, Michael was awarded the Employee District of the Year Award.

Prior to working in Red Oak, Michael was the Director of Engineering at Baylor Medical Hospital and was responsible for the engineering, housekeeping, transportation, and security.

Michael was married in 1977 and has 3 boys and 9 grandchildren.