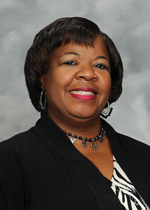 Tamelia Moore joined Red Oak ISD in 2000.  She served from 2001 to 2015 at the Red Oak Intermediate campus. She was named District Receptionist for the Education Service Center in 2015.  In 2017, Tamelia was named Focus Daily News Best Receptionist in Southern Dallas and North Ellis Counties.

Tamelia is married and has two sons, Aaron and Trent